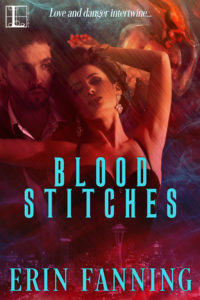 Just released from Kennsington/Lyrical Press is Erin Fanning’s Blood Stitches. Congrats, Erin! Thanks for stopping by for an interview.

First, a bit about the book:

It’s called El Toque de la Luna—The Touch of the Moon. At least that’s how nineteen-year-old Gabby’s older sister, Esperanza, refers to the magical powers she inherited from their Mayan ancestors. Esperanza says women with El Toque weave magic into their knitting, creating tapestries capable of saving—or devastating—the world. Gabby thinks Esperanza is more like touched in the head—until a man dressed like a candy corn arrives at their Seattle home on Halloween. But “Mr. C” is far from sweet…

Soon, Gabby and her almost-more-than-friend, Frank, find themselves spirited away to a demon ball, complete with shape shifters—and on a mission to destroy Esperanza’s tapestries before they cause an apocalyptic disaster… And before it’s too late to confess their true feelings for each other.

And now for the interview with Erin!

What inspired you to write this novel?

In 2009, an Italian woman, trapped underneath her bed after an earthquake, kept herself occupied by knitting. I read about her around the same time I was learning how to knit. I imagined firefighters digging through the rubble and finding her wrapped in a knitted afghan.

The story tumbled around in my brain, somehow intersecting with my interest in Mexican culture. From there, I discovered the Mayan twin myth and the battle with the demon Vucub Caquix. Bit and pieces of Mayan mythology adhered themselves to my imagination, morphing into a history of magic and needlework.

Soon Gabby and her family formed, along with a question: what if you could not only knit your way to safety but also create a disaster through knitting. It wasn’t long afterward that Blood Stitches pushed its way through my fingertips.

Besides your main character, who is your favorite character in this book and why?

My favorite has to be Tory, a man born in a Petri dish, the product of a deranged doctor. Tory is a bumbling, goofy guy, but, underneath it all, he’s really fearless, willing to do anything to save his friends and family.

Did you always know how this book would end, or did it change as you wrote it?

I always knew that there would be a happy ending—I can’t stand sad endings—but I wasn’t sure how I would get there. It became clearer as I went along, and I think I knew the direction I would take by about the middle of the book.

Can you tell us a little about your path to publication?

I wrote Blood Stitches several years ago and set it aside. I pulled it back out about two years ago and revised it, basing the story more on Mayan mythology. When I started looking for a publisher, I discovered that there were many medium-to-large publishers who were interested in shorter books for their digital-only lines. 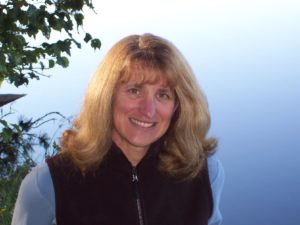 Erin Fanning spends her summers on a northern Michigan lake, where her imagination explores the water and dense forest for undiscovered creatures. In the winter, she migrates to central Idaho, exchanging mountain bikes and kayaks for skis and snowshoes. She’s the author of a mountain biking guidebook, as well as numerous articles, essays, and short stories.

Buy from Amazon, Barnes and Noble, Kobo, Google, or Itunes!