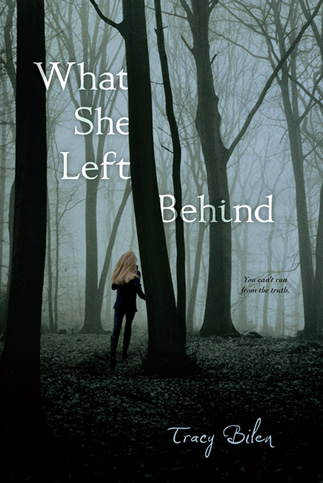 What inspired you to write What She Left Behind?

When I sat down to write this book, I had an image in my mind of a girl, a suitcase, and a gun.

What was the hardest part to write in What She Left Behind?

Definitely the end! Finally I wrote two alternate endings and had my editor pick. And from there I wrote the last couple of pages, which are some of my favorite.

What’s the story behind your (American) book cover?

Designed by Jessica Handelman, the cover is the result of the merging of two photos: one of a girl running and the other of a forest. 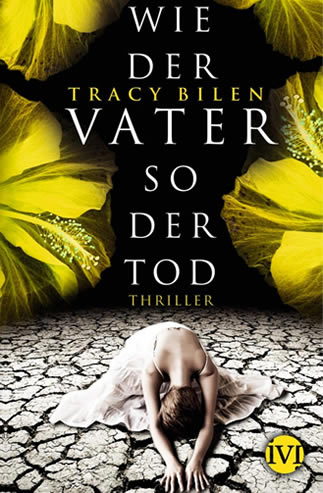 What do you think of the German cover of What She Left Behind?

I love this cover…while I have never seen cracked earth like that in Michigan and the girl on the cover looks nothing like the way I’ve described Sara, I think it’s the perfect figurative representation of this story!

How would you describe Sara, your main character?

What was your favorite part of What She Left Behind to write and why?

In the middle of all the bad things going on in Sara’s life, there’s Alex. This adorable guy who’s falling in love with her. And who she doesn’t want to leave. Alex is hot, sweet, and just a little bit bad.  So the scenes with Alex in them were my favorite ones to write.

Tell us a little known fact about yourself.

I worked for a couple of years as an astronomy lab assistant and got to teach people where all the constellations are (but don’t ask me to point them out now!)

If you had to choose a song to portray your book, what song would it be?

How did you celebrate book launch day?

On book launch day I had to judge the high jump event at a track meet (no, I’ve never done the high jump myself, but I’m really good at making little hash marks on a clipboard). But I did have a fun launch party the Saturday after!

Can you give us a quote from What She Left Behind?

“She’s calm. Matter-of-fact. As if she’s asking me whether I want mayo or mustard on my sandwich. Except in secret.”

What’s next for you?

Another YA thriller – think action and explosions!

How did you find your agent?

I used querytracker.net to identify agents that represented YA authors. As a member (it’s free to join), I was able to track on-line who I’d submitted to and what their responses were. I actually met my agent, Kevan Lyon, at a RWA chapter meeting.

What advice would you pass along to those of us who haven’t gotten that first book published?

Try to stop writing. (I know, you’re ready to kill me now – how is that inspiring??!). But I’m serious, in a way. Throughout my writing journey, I tried to stop (why did I want to publish a book anyway?) But I couldn’t stop. I always came back to it. So if you try to stop writing and you just can’t, you’ll know that you were meant to do it (and that your mind won’t give you any peace if you don’t). If that’s the case, go with it. Keep writing. Keep querying. Write something new while you’re querying (I wrote What She Left Behind while I was querying a book that didn’t sell). Join the professional organizations for your genre. Find a critique group with people who write in the same genre or for the same age-group. And don’t give up. Think back to when you were looking for your first (serious) job. It may have seemed impossible at first. You kept trying different things until you hit upon something that worked. And now when you look back on in, it doesn’t seem that bad. The publishing process is probably going to take you way longer than it took you to find that first job. But it’s worth it. And you can do it!

The fabulous Denise Biondo of biondostudio!

How did you decide to become a French teacher?

When I was in third grade my aunt said that someday I should study at the Sorbonne in Paris and that she would come and be my chaperone….well, it didn’t turn out exactly like that, but pretty close. I got a “teach yourself French” record set at a rummage sale and I used to listen to it all the time (it would always get stuck on the line “my shoe size is 42”, so I know how to say that really well).

Is there any French influence in your debut novel?

I did sneak in the word Versailles, but otherwise no! However, Sara’s brother is a wiz at learning languages.

What was your first favorite book?

Your main character, Sara, loves to read horror novels. What were your favorite books when you were growing up? Did those books inspire you to write?

My absolute favorites when I was young were Trixie Beldon mysteries (discovered in my grandmother’s attic) and Anne of Green Gables. I keep my favorite quote from that book on my classroom wall: “Today is a new day with no mistakes in it yet” (as much for me as for my students). Sara’s love of horror was inspired by the movie version of Stephen King’s Cujo which I saw when I was way too young, and his Misery which my mom MADE me read when I was in high school.

Did you always want to be a writer?

The first thing I really wanted to be was a veterinarian (this lasted until I realized I couldn’t stand the smell of formaldehyde). When I was thirteen, my parents bought a Victorian house from author Millie J. Ragosta, who had used the house as the setting in two of her books. From that point forward, I was hooked.

What was the first story you wrote?

In fifth grade I wrote a story about a dog who flew a rocket ship to the moon.

You were the winner of the SCBWI-MI novel mentorship competition for 2009.  Tell us about this experience and how it helped you meet your writing goals.

This was such a fantastic opportunity! My mentor was the amazing Shutta Crum who read and gave me feedback on my novel five times throughout the year. We met every couple of months to talk about the suggestions Shutta had. She also shared with me some of her favorite first pages of other YA novels, and referred me to articles and books that addressed specific areas I needed to work on.

What’s your favorite kind of cake?

Waldorf Astoria Red Cake. Only I’ve always wanted it to be green. Not only is green my favorite color, but it would match my book cover.

What is your favorite word?

Plethora. Because it’s the first fancy word I ever learned. I don’t ever say it out loud, but I THINK it a lot.

Purchase. It just sounds way too formal. I like buy. Not purchase. BUY.

What single thing would improve the quality of your life?

A transporter. From Star Trek. Because I love to travel but hate getting there. Airplanes make me sick, so just thinking about taking a plane anywhere spoils the fun.

I’ve thought optometry would be cool (I like the part where they ask, “Is it better one or better two?”)

And I’d really LOVE to learn to paint. But I have absolutely no patience for it. ZERO. That and I’m horrible at it.

What profession would you never, ever want to have?

Anything that involves the smell of cleaners or working in a bathroom.

Tell us a little known fact about yourself.

I worked for a couple of years as an astronomy lab assistant and got to teach people where all the constellations are (but don’t ask me to point them out now!)